▷All the information about the Plaza de San Francisco in Seville

Square of San Francisco in Seville

Located between what is now Plaza Nueva and the Town Hall, this site was established as the “heart of the city” in the 16th century. The Plaza de San Francisco has always been a very important point in the history of Seville. For this reason, it is very unlikely that a visitor to the city will not end up in this place. Events such as the well-known autos de fe of the Holy Inquisition were held here, and to this day it is still a very important place. It is one of the main transit points for the Corpus Christi and Holy Week processions, and from here you can enjoy spectacular views of the Giralda.

History of the Plaza de San Francisco in Seville

This enclave belongs to the first centuries of the Andalusi period, where it was built in the urban periphery, near the access gates to the city and in the vicinity of a cemetery. After the construction of an Almoravid wall, it was built in the urban interior of the city. Since then, it has undergone few changes and since the beginning of the Middle Ages it has had practically the same dimensions and trapezoidal shape that determine it today.

One of the most characteristic buildings in this area is the Town Hall or Casa Consistorial, begun by Diego de Riaño between 1527 and 1534, continued by Juan Sánchez between 1535 and 1540 and extended in the 19th century by Demetrio de los Ríos. 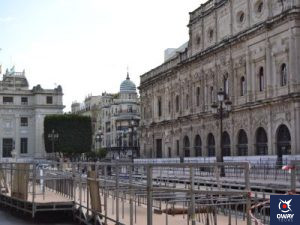 For centuries it was one of the city’s commercial centres. Until, in the 16th century, the famous Autos de Fe (Acts of Faith) began to take place in the square. This fact places this square as one of the most significant sites of the Inquisition in the city.

In addition, over the centuries it hosted other events such as tournaments, bullfights, masquerades, concerts and celebrations.

One of its most representative elements is the Mercury Fountain, which is currently located in front of the Bank of Spain building. But its history has been far from easy, as it has a long history and has undergone a series of changes up to the present day. 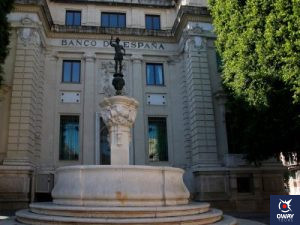 The origin of the name

How to get to the Plaza de San Francisco in Seville

The Plaza de San Francisco is located in the heart of the old town. If you want to know what to do in the city; from OwayTours we recommend you to visit our blog about Seville; where we explain the most important things to know if you are in the city.

Its access is easy, as it is located near shopping and leisure areas. It is also home to curious buildings such as the former Audiencia building (now the headquarters of the Cajasol Foundation), the Casa de María Cháfer, the Bank of Spain, the rear façade of the Casa Consistorial and the Laredo building. Some of its busiest adjacent streets are Calle Sierpes, one of the most significant and busy streets in the city due to its great commercial and tourist activity, and Avenida de la Constitución.

To get to this enclave you must follow the following transport lines:

Curiosities about the Plaza de San Francisco in Seville 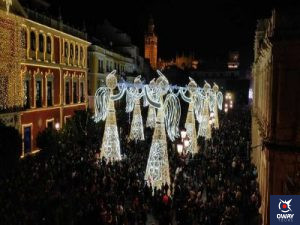 Other recommended services if you are in Seville: