The Alcazaba of Antequera

History of the Alcazaba of Antequera

The Alcazaba of the city of Antequera is located on the top of the Malaga hill of the medina of Islamic origin in the area.

Although believed to be of Roman and Visigothic origin, the Alcazaba is first documented in the 11th century by Semuel ibn Nagrella, a Jew dedicated to poetry during the Almohad reign.

During the 8th century, the Islamists occupied this low-protection building in the area until the beginning of the Caliphate between 912 and 1016, when these fortresses were reinforced as a defence and the enclosure that surrounds it was created.

Between 1016 and 1090, the Hammudid kingdom of Malaga tried to seize the taifa of Antequera, unsuccessfully in the face of the appearance of Granada, which rose to power, naming its population from that time onwards as the “Zirids of Granada”.

At this point, both the Almoravids and the Almohads decided to take control of al-Andalus between 1090 and 1232. Many of the buildings in the complex date from these dates.

In 1361, during the Nasrid reign, the existing walls prevented the domination of the complex by the Castilian Pedro I, giving rise to the popular name of “strong city”. Finally, despite its subsequent fortification and after 5 months of fighting, the Christians managed to take control of this historic heritage site during the Taking of Antequera in 1410.

The opening hours are from 10:00 a.m. to 6:00 p.m. every day of the week. On public holidays the opening hours change and should be consulted prior to organising your visit to the monument. Thus, on the eve of Epiphany, 5 January, Christmas Eve, 24 December and New Year’s Day, 31 December, the opening hours are reduced from 10:00 am to 3:00 pm. On 1 January, 6 January and 25 December, Christmas Day, the monument will be closed to the public. Entrance to the Alcazaba is not allowed in the 30 minutes prior to closing time.

The entrance to the monument includes access to the Royal Collegiate Church of Santa María.

If you have already made the visit discover other activities you can do in Malaga.

The entrance fee per adult within the fixed opening hours is 6 euros, with the possibility of obtaining a discount for groups of 20 people, which reduces the price to 5 euros per visitor. Children under 6 years of age, including the latter, have free access to the inside of the monument. If they are over this limit and up to 16 years of age, the final price of their ticket is 3 euros. Retired persons must also pay 3 euros per ticket, with a 50% discount if they visit the monument in a group. Admission to the Alcazaba will be free for all the public on Tuesdays from 14:00 to 18:00 in the afternoon, except for public holidays and their eves, with the possibility of applying this advantage to the next working day after the dates indicated.

It is also possible to take a guided tour using an audio guide or accompanied by a professional. The price should be consulted via e-mail.

Complete your trip to Antequera by visiting the Gibralfaro Castle, the Cathedral, the Roman Theatre, the Alcazaba or the Bullring of La Malagueta.

The visit is divided into two parts, on the one hand, the Alcazaba itself and, on the other, the surrounding area. The most outstanding landmarks are:

The venue is located in the heart of the historic centre of the city of Antequera in Malaga. Specifically in the Scribe’s Square. The post code is 29200.

The town is about 51 km from the capital. If you spend the night in Malaga it is possible to travel to the place by car using the A-45 motorway for 48 minutes. There are public parkings close to the area of La Alcazaba.

If, on the other hand, you use public transport, there are 3 possible bus lines to choose from with the ALSA company, all covering a journey time of approximately 1 hour. It is suggested to make the journey by this means of transport due to the fact that Antequera train station is further away from the centre of the city, which is an additional difficulty for visitors travelling to the monumental site. Once you have arrived at the bus station, the 1.9 km route can be covered on foot in about 25 minutes. 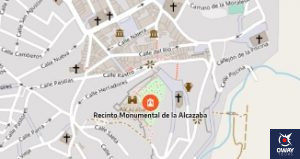 Some of the curiosities that surround the history of the place are: