▷ The Capuchinos Square and the Christ of the Lanterns | OWAY Tours 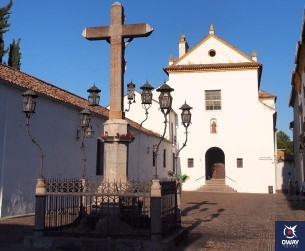 History of the Capuchinos Square

The history of this square begins in the 17th century. There stands a building designed by Rafael de la Hoz which houses the Franciscan friars, accompanied by the church of Sorrows, the Christ of the Lanterns and the Hospital San Juan y San Jacinto.

It was known as ¨Almunia or Corbacho Square¨.

The author of the convent claims that ̈ never before in architecture had so much been done with so little ̈. This building of intense white colour endowed with lime was acquired in 1629 by Fray Félix to start the convent, finishing its renovation in 1633.

The church was built years later. On its façade there were three arches, of which only one remains today, the central one. It holds a representation of the Virgin of Sorrows, ¨the Lady of Cordoba. ¨

The square was built on top of houses that belonged to the Almunia family.

On the other hand, the hospital was moved to the square by order of Father Posadas in 1717. It has a similar construction to the church and has an image of San Jacinto on its façade.

The friars who lived in the convent experienced several confiscations. The Mendizábal confiscation in 1835 put an end to it, as it was located in a crossing area between neighbourhoods. It was subject to sale and consequent destruction and usurpation of the objects it housed.

In 1950, the original asphalt of the area was modified by Antonio Cruz Conde, then president of the Cordoba Provincial Council.

Today, this square hosts events and tourists who come here to admire first-hand the simplicity that characterise it.

Come and immerse yourself in the history of the Synagogue, the Palace of Viana, the Julio Romero Museum, the Calahorra Tower and the Royal Stables.

What is the Christ of the Lanterns?

This Christ, the work of the Cordovan Juan Navarro in 1794, protects the Capuchinos Square from the centre of the square. It was promoted by the Franciscan friar Diego José of  Cadiz and its financing was made possible thanks to the Marquises of Ariza.

It is crucified in black marble, while the figure is made of white marble. It is accompanied by eight lanterns that illuminate the square at nightfall. ¨And time has remained inert and white, stopped in the centre of a square where a moonlit Christ between lanterns agonises relentlessly year after year ̈. This is how the Cordovan poet Carlos Clementson described the scene presented.

Furthermore, the Christ is surrounded by railings paid for anonymously in 1924 by a Cordovan. The then mayor, José Cruz Conde, initiated the petition for the removal of these railings, until Ricardo de Montis, a journalist from Cordoba, requested their conservation. The latter also suggested replacing the oil lanterns with electric ones. Finally, in 1984 the lanterns were replaced.

This Christ, besides resting on a square of vital importance for the Cordovan Holy Week, has witnessed the filming of several scenes of feature films throughout its history. An example of this is the film ¨i am that one¨, directed by Luis Sanz and starring Isabel Pantoja and José Coronado.

Discover what to do in Cordoba after visiting the Christ of the Lanterns. 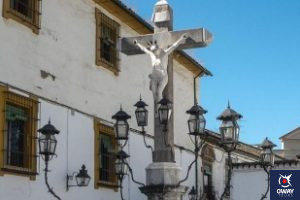 How to get to Capuchinos Square

The square opens up through two possible entrances opposite each other. First is via Conde of Torres Cabrera Street. Second is through the Bailío Slope.

Access is forbidden to vehicles, so it is advisable to use public transport. The nearest stops are Alfaros (Juan Rufo), 3 minutes walk away; East Colón, Ronda Tejares (12 October) and West Colón, 5 minutes walk away; and San Pablo, 6 minutes away. The different bus lines that run in the vicinity of the site are 10, 7, 9, E and N.

Accompany your visit to this landmark located in the heart of the Jewish quarter, completing your trip with one of our guided tours to the outstanding Mosque-Cathedral, the Medina Azahara Archaeological Site, the Alcazar of the Christian Monarchs or the famous Patios of Cordoba. 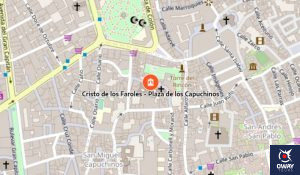