What to see in Granada in three days - Oway Tours 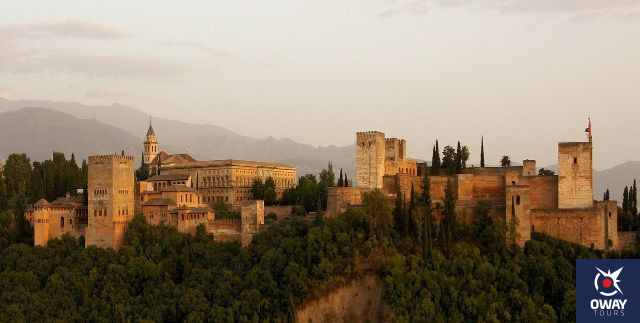 Granada is the essence of Al-Andalus, a monumental city full of history and myth. You can’t visit Spain without stopping off in the Nasrid city, and once you’re there, any time you spend in the city will be short-lived. Granada is a fusion of a space clearly marked by the heritage of the Arab presence in Spain, as well as the nature that surrounds it, as it is a city located at the foot of the Sierra Nevada.

If you are only going to spend three days in Granada and you want to make a complete visit to the city, this is the guide you are looking for. The aim is to make the most of your visit by making it as varied as possible. In three days you can perfectly organise a route around the city that will allow you to have a relaxed trip while still getting to know Granada.

First of all, to start getting to know the city, on the first day you can immerse yourself in the history of the city by visiting the Alhambra. This monumental city is made up of several palaces and gardens that will leave you speechless. The Alhambra housed the Nasrid court of the Kingdom of Granada so you will find richly decorated rooms and magnificent courtyards. There are different buildings which are the Generalife, the Palace of Charles V, the Alcazaba and the Nasrid Palaces. It is better to do this visit in the morning, but you should know that if you do not have your tickets booked there will be long queues.

It is essential that you take your time to visit the monumental complex without rushing, in order to appreciate every detail. The peace of the courtyards and the sound of the fountains will take you back to the time of the Muslim invasion.

At this point we are in the famous Albaicín quartier, where you can take a tour passing by different emblematic places of the city such as the Carrera del Darro, the Arab baths El Bañuelo, the Casa Zafra and the Casa del Chapiz.

This city tour will have given you a glimpse of all that the city of Granada has to offer and you will have observed the fusion of cultures that can be seen in the city, although Hispano-Muslim architecture predominates.You can end the day with a drink in this neighbourhood known for its traditional taverns and tapas bars.

Map route for the first day in Granada: 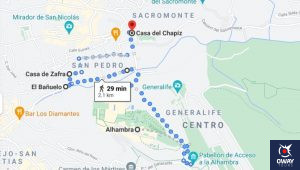 The second day can start with a breakfast of churros in any of the city’s typical churros bars, and then proceed to visit the Cathedral and the Royal Chapel, which opens at 10:00. Although the Alhambra takes all the fame, the Cathedral of Granada hides many secrets, such as the tombs of the Catholic Monarchs, Juana la Loca and Felipe el Hermoso. This temple is full of majesty on all four sides, both outside and inside. If you want to know all the secrets and enigmas hidden in the Cathedral and the Royal Chapel, Oway Tours offers you a guided tour in which you will get to know the monument in depth.

Guided Tour of the Cathedral and Chapel of Granada 31€ Book

Granada is a city that is made for walking and getting lost in its streets and finding the mysteries it has to offer. As it is a spectacular and charming place, there is no need for a completely fixed itinerary. Granada is one of those places that never disappoints and where you will find something to admire around every corner.

You can walk through the city on your way to Sacromonte and its caves. It is a legendary neighbourhood, cradle of flamenco and with caves excavated and fitted out to create flamenco stages. After enjoying this visit, you can indulge yourself and relax in the Hammam Al-Andalus, a modern version of the Arab baths.

At sunset you can’t miss the sunset at the Mirador de San Nicolás, one of the most famous of Granada’s many viewpoints, which offers wonderful views of the Alhambra in all its splendour. There, you will enjoy the sunset and the sound of guitars.

Map route for the second day in Granada: 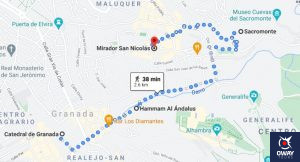 On the third day, you can take a bus to the Cartuja Monastery, one of four present in Andalusia. The monastery has a mixture of architectural styles starting with its Renaissance façade and the baroque altar of the church. It is a full experience of the life of the friars and monks who lived there, see their rooms and where they ate.

Afterwards, you can eat at Abaco Té, a restaurant where you can enjoy a spectacular atmosphere. You will have a great time with views of the city and a fusion of Arabic and Spanish gastronomy at a very affordable price.

To end your visit to Granada, you must make a stop in the popularly known as Calle de las Teterías, full of Arab shops and tea shops or teterías that will make you feel like you are walking in Marrakech. You can’t leave Granada without having an authentic tea in one of these places. From here you can say goodbye to the Nasrid city, ending your tour at the Mirador de las Carvajales watching the sunset.

Map route for the first day in Granada: 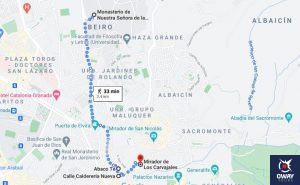 Our Top Tips for visiting Granada